Rafta Rafta, Atif Aslam’s much-awaited song and its music video released yesterday. Starring Sajal Aly, the latter was a treat to watch. But the track itself was a sub-par attempt at a feel-good, romantic number, especially when compared to the impeccable ballads Atif has offered plenty a times before.

With its monotonous music and clichéd lyrics, the song disappoints to say the least. So much so, that even Atif’s vocal range and bassy texture can’t save the day. Oddly enough, as pretentious as the part in Punjabi seems, it does however; add a little flavour to the track.

But the samples layered with the tabla make it reminiscent of so many Bollywood numbers that it can as well be mistaken for one. In retrospect, Rafta Rafta is just one of those songs that take away from what Atif is truly capable of. His singing, albeit, makes it passively listenable but nothing you would willingly, enthusiastically play in your car or sing along to. If anything, Rafta Rafta is just another Atif original that proves he is currently struggling with creating or nailing original tracks.

The music video, on the other hand, is a three and half minute fairytale shot against the picturesque backdrop of Skardu. And had it not been for this video the song would’ve fallen face-flat. 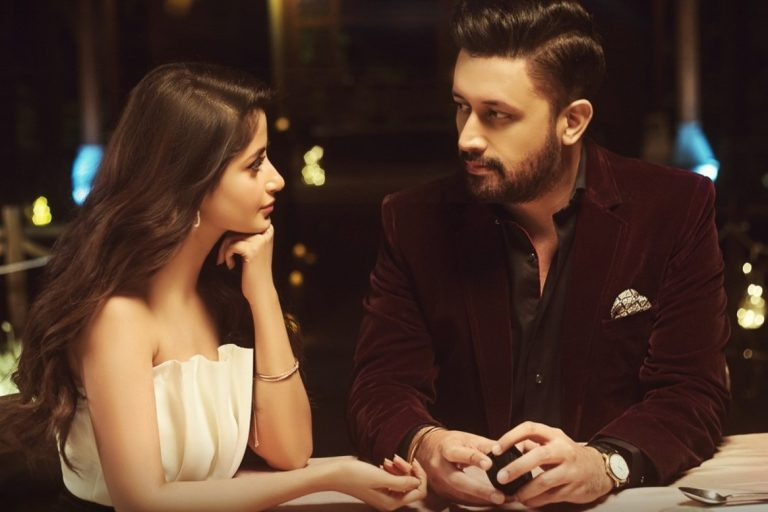 It sees Sajal and Atif in their finest attires staring into each other’s eyes. And Sajal’s charm, paired with Atif’s grit make for a pleasing watch. The two bask in the glory of the mountains and camp alongside a beautiful lake only to gaze at the stars together. They also end up on a romantic dinner where Atif proposes to Sajal, making the video all the more dreamier.

Prior to Rafta Rafta, Atif’s Raat wasn’t much of a hit either. But his renditions are a different story. Setting the bar high with Mustafa Jaan-e-Rehmat, Atif went on to recreate Noor Jehan’s Aashiyane Ki Baat. Titled Dil Jalane Ki Baat, Atif’s version of the song fused elements of South Asian Classical music with a western sound, almost mimicking a trans number. The mid-song climax followed by a soft breakdown without disposing off of the percussions, offered an almost heightened Qawali experience that can leave one wanting more.

Have something to add to the story? Share it in the commets below.

Previous Songs for YOU AND YOUR FRIENDS IN THE CAR
Next From China to Germany, floods expose climate vulnerability